I am joining in once more with Laura over at "Circle of Pine Trees". Sharing my books and enjoying what everybody else is reading, too.

I only just finished my January read, Philip Roth's "A plot against America" today. It was a long read with small print and a story demanding my full attention. I thoroughly enjoyed this book and I am deeply touched by the story.

The story is haunting and disturbing and if it wasn't for the boy narrator (8 at the beginning of the book), I don't think I could have finished the book. The narrator is a fictional Philip Roth, who is weaving together child hood memories from a war time Newark with the fictional story.

Philip Roth describes an alternative history of the second World War in which president Roosevelt is defeated in the presidential election of 1940 by Charles Lindbergh, who is closely modelled on the real life Lindbergh, a member of the America First Committee, a non-interventionist pressure group against the American entry into World War II. He had ties to Nazi Germany and was a believer in eugenics and was suspected of being a Nazi sympathiser.

The story follows the lives of the Roth family during the Lindbergh presidency, at time during which anti-Semitism in America is on the rise and Jewish-American families like the Roths are experiencing increasing persecution. The Roth see themselves as American first I think but this is not how society defines them. The book is very political.

An aspect that I found particularly enjoyable is the small glints of normal boyhood in a normal family of the time. Philip candidly talks about his family relationships and the tensions that arise when very different individuals share a live. These small insights into normality lighten to sombre tone of the book somewhat.

The writing is compelling in typical Roth fashion and there were many moments where I had to shake my head and remind myself that this story is largely fictional. I am glad it is!

I am afraid this is not a very critical review.... Have you read the book? Did you like it?

You can find more eloquent and more thorough reviews of the book here and here.


My February read is "No great mischief" by Alistair McLeod 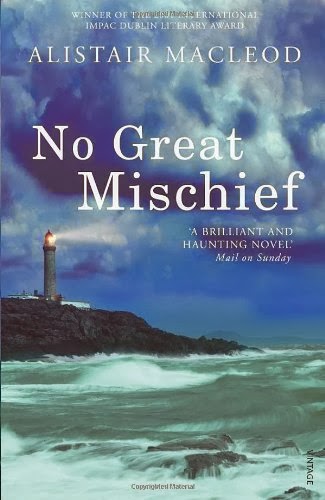 I borrowed the picture from Amazon UK
It is a multigenerational story about Scottish emigrants in Canada.

I have not had a chance to read much else because I have been reading so many interesting blog posts about books I would love to read.... My Amazon wish list is getting longer by the day.
I am listening to "The book of Dave" by Will Self for my book group. I am only half way in and find it on the weird side. It took some getting used to but I think I have settled into a nice routine of listening to a chapter now and there. I struggle with the language the most. I had to google some of the expressions and found an explanation on the books Wikipedia page. A large part is written in "Mokni". This is apparently  an invented dialect of English that has its origins in Cockney and from the "hero" Dave's own peculiar vocabulary and it is sometimes reminisicent of text messaging language, too. I bet this book is going to split the book group into "hate" or "love".

Time to post this and start reading some of your suggestions over at the link-up! Cx