Once more I am joining in with Laura over at "Circle of Pine Trees". This online book group has been a most enjoyable experience and I would recommend to anyone to read some of the linked posts, and maybe join.

Book wise, this was one of the best months in years. I have read and listened to many books, more than my usual average.

My February read was "No Great Mischief" by Alistair McLeod. I can't say this was my favourite book ever and I don't think it will go in the pile of must-read-again books but I did enjoy it because of the Scottish theme and the beautifully crafted stories. Here is the Goodreads blurb, it sums to book up better than I ever could:


"Generations after their forebears went into exile, the MacDonalds still face seemingly unmitigated hardships and cruelties of life. Alexander, orphaned as a child by a horrific tragedy, has nevertheless gained some success in the world. Even his older brother, Calum, a nearly destitute alcoholic living on Toronto's skid row, has been scarred by another tragedy. But, like all his clansman, Alexander is sustained by a family history that seems to run through his veins. And through these lovingly recounted stories-wildly comic or heartbreakingly tragic-we discover the hope against hope upon which every family must sometimes rely."
The storyline is a series of reflections by Alexander, a successful orthodontist. He is visiting his alcoholic brother Callum in his bedsit in Toronto and, whilst he goes in search of drink for his brother, he is remembering and reflecting upon stories of his life and his family. I don't want to spoil anyone's enjoyment by revealing more.
Other books I read this months were books I discovered in the January and February posts of The Year in Books linkup. Thank you to all for the great many hours of joy you have provided me with your recommendations.

For my book group I listened to "The Book of Dave" by Will Self. It was a book that made for a lively discussion, although it didn't split the group into love-it or hate-it, as I had expected. Everybody found something they liked. There are two strands of story, one set in the present time, one in the future. The future is a post climate change world in which society is built upon the book of Dave, a book written by Dave, a London cabbie, during a protracted mental breakdown. This is described in detail in the present time story line. The book begins in the future, which is presumably deliberate but is really off-putting. There was only about half of the book group present and I suspect that those who didn't come, didn't make it past the first chapter, which is a real drag.

The format you choose is quite important for this book. I think it lends itself for audio because the parts of the story that is set a post climate change future Britain is in "mokni" a dialect based on Dave's rather distinct accent. Unfortunately, written down, it looks like gobbledegook. The grammar is quite frankly awful and there are millions of apostrophes. The vocabulary is strange but becomes clearer as the book progresses. Here some examples for frequently used words:
The audio version makes the chapters in the future more easy to understand because you don't have to guess where words begin and where they end.... On the other hand, there is glossary at the end of the book, which is missing from the audio version. There is also a map of the future greater London for reference. This is missing from the Kindle version, and the glossary is apparently not available either, or difficult to access because of the way books are read on a Kindle. 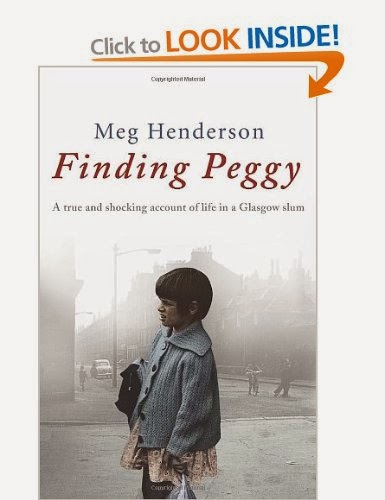 My March reading is "Finding Peggy" by Meg Henderson. I chose this book because it is set in a poor neighbourhood in Glasgow during the 1950s. I like to read books that are set in the city that we chose to be our home. I suspect Peggy's life is very different from mine, and very different from a Glaswegian life today, too.

I am now on Goodreads, if you fancy joining me there, or if you want to check out my recent reading history.


Happy reading everybody!
Cx
Posted by Christina at 21:07