How is your reading going? Mine is rather slow. I think I need a bit of a genre shake-up. 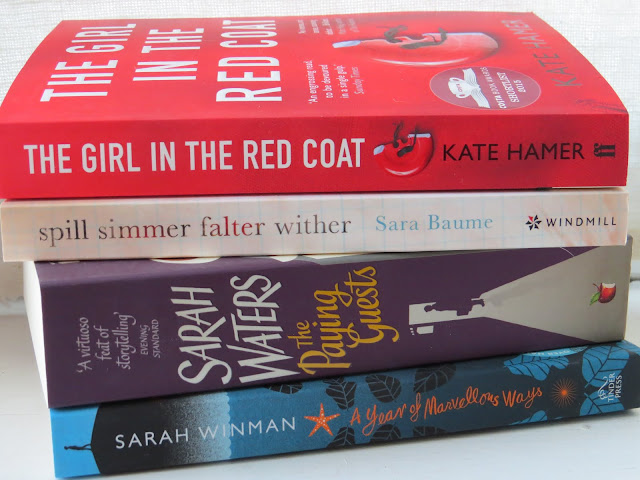 In January, I have been listening to audiobooks exclusively. In fact, I went on an audio binge  I wanted to be able to knit and sew and enjoy books all at the same time. I listened to five parts of a new to me crime series, Ben Aaronovitch's 'Rivers of London' . Ben Aaronovitch has in the past written scripts for Dr Who, a good indicator of the general gist of his books.
The novels are narrated in the first person, which I don't usually like all that much. But Peter Grant, the lead character and accidental apprentice wizard detective (rightfully employed by London Metropolitan Police), is ever so charming and has a wicked sense of humour. If you like detective novels and if you like a dose of the unreal, you'll like this series. I think I like the narrator even more than the stories, it is Kobna Holdbrook-Smith. He has a mellifluous voice, really enjoyable to listen to. He does all characters justice. When I choose an audiobook I often listen to a sample first. There is nothing worse than a narrator with a high pitched voice and a clipped accent. I prefer 'my' narrators to have the accent of the location of the story. A novel set in Glasgow narrated with a London accent is just wrong. I always wonder how easy it might be to pick up an accent? I am fairly certain this depends on your hearing?

Then I downloaded a science fiction book, 'Wool' by Hugh Howey. It is part of a trilogy, 'Silo'. This story is set in the future, when pollution has made it impossible to live on the surface of the Earth and humankind, or at least a small part thereof has moved underground into enormous silos. I am not entirely sue if there is more than one silo. It is a a weird and rigid society, archaic somehow. There are no lifts in the silo, which seems odd considering that the deepest level is 154 floors underground and that lifts have been part of our society for decades. I didn't get very far before I got bored and I have abandoned the book for now. I may pick it up again in the future.

I think I am going to give science fiction a miss for a while. I am also going to save my audiobook credits for later because I have small pile of 'real' books I want to read. Maybe I can train the teenager to read to me whilst I am working on my quilt :-)
The book on top of the pile was a recommendation by Doris (read about it here). She notes that she was hooked and could not bear putting the book down. I am hooked already but I am also a little frightened...

What are you reading? Am I missing any great new or old books I should definitely read? Let me know. Happy reading! xx
Posted by Christina at 10:12