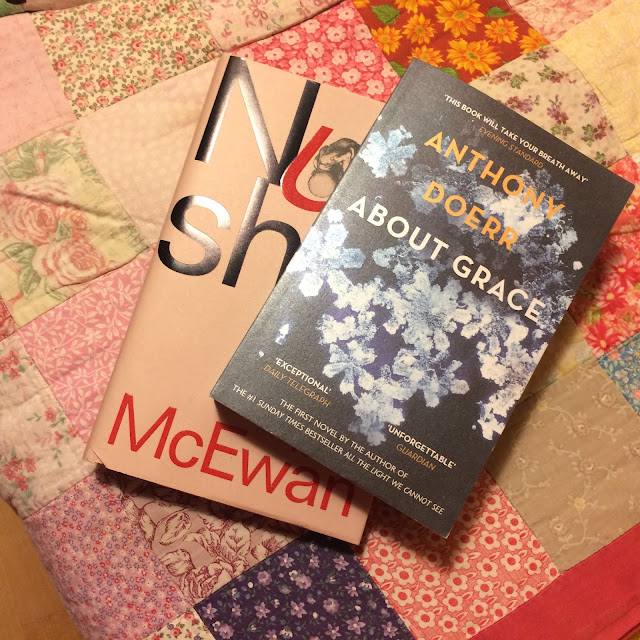 You would have thought with two weeks off work I'd have a chance to write about my literary exploits! I swear that time speeded up during this two week break, hours seemed like minutes and the holidays passed far too quickly.

I finished three books in December, all of which I enjoyed. I mentioned 'Paying guests' by Sarah Waters in my November reading post. I was reading this a page at a time whenever I a free minute coincided with me being in the same room as the book. I am not sure if reading a book one page at the time is the best approach to a good story, it took me quite a long time to get into it. There is a long buildup that some readers my find boring. It is a slow burner that suddenly explodes. I don't want to give anything away but the bare essentials so you can enjoy the plot. Mind you, it is a bit grim at times so maybe enjoyment is the wrong word. The book is set a few years after the First World War, the economy is at a low point and life is difficult for many. Frances and her mother need to sublet rooms in their family home to make ends meet and at the beginning of the story, Lilian and Leonard Barber move in. Over time, we see relationships form and disintegrate, societal benchmarks challenged and lives changed forever. I was not quite satisfied with the ending but I guess I can rewrite it in my head.

I listened to the latest instalment of the Rivers of London crime series, 'The hanging tree' by Ben Aaronovitch. I enjoyed the first five books and also this last one, where once more Peter Grant, a trainee 'practitioner' employed by The Folly, a division of sorts of the London Metropolitan Police, is called to investigate a suspicious death. It is a fast paced book with plenty of magic. I don't think the plot is as carefully planned as it could be but it is entertaining. I am not that keen on magic (says the fantasy and sci fi reader). Harry Potter grows up to be a detective, that sort of thing and I don't think I would have picked up a second book if I wasn't hooked by the narrator. Kobna Holdbrook-Smith is amazing. I could listen to him talk all day long and it is real shame that there are not a vast number of books narrated by him. I love his voice and wouldn't mind listening even if he spoke in a foreign to me language. If I wasn't a respected middle aged matron one might suggest that I am slightly infatuated with this voice...

My favourite read has to be 'All the light we cannot see' by Anthony Doerr. I was enchanted by this book, loved every minute of it and wished I could speed the narration up to move through the story quicker. It is of course possible to increase the narration speed but this makes the voices sound weird. At the same time I wanted the book to last much longer. The story is about the lives of Marie-Laure and Werner before and during World War II, and how their life stories finally converge towards the end of the war in St. Malo. Marie-Laure grows up in Paris with her locksmith father. He works for the Natural History Museum, where Marie-Laure spends large parts of her early childhood. She is blind but her doting father builds perfect replicates of their neighbourhood to help her navigate town. When Paris is occupied, they leave for St. Malo, to leave with an uncle who becomes involved with the resistance movement. Meanwhile, in a small mining town in Germany, orphan Werner develops a love and skills for repairing radios. He wins a place at an academy for Hitler Youth and is later assigned to track resistance movements. He grows more and more aware of the human cost of his intelligence, an awareness that eventually protects Marie-Laure and her uncle. I have received another book by this author and look forward to reading it.

I have of course not even touched the book that I wanted to read in December, 'Bedlam' by Christopher Brookmyre. I'll get to it at some point.

My reading has been very escapist in 2016. I have read few books that are about 'real life' and have mostly indulged in science fiction and fantasy, with some crime fiction sprinkled on. I felt the need to have a place in an imagined world where nothing is like my own life. There isn't anything inherently wrong with my own life of course but a lingering discontent and a good deal of anxiety in general meant that I just couldn't relax with books that largely played in our real world. I am not sure what genre I will gravitate towards in 2017 but I think a small dose of reality is in order. Any suggestions would be welcome.

Thanks for stopping by! I love to read your comments, every single one is highlight in my days. x