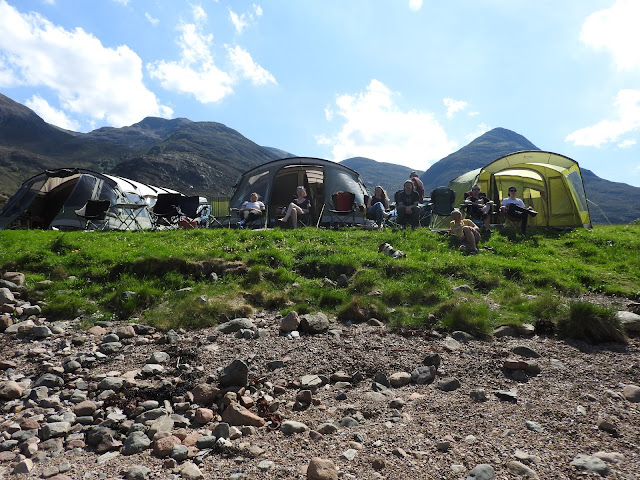 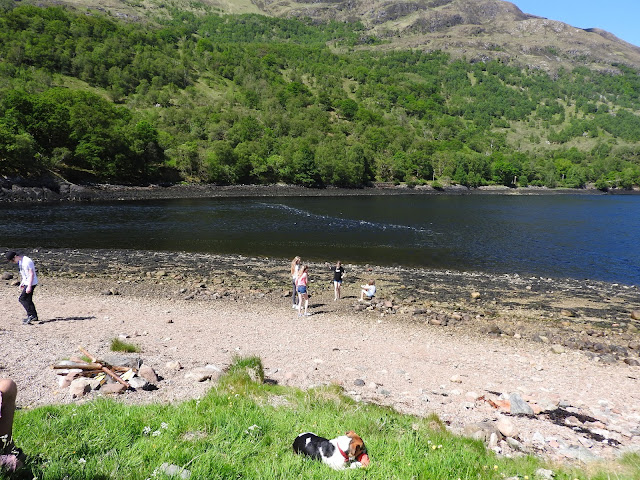 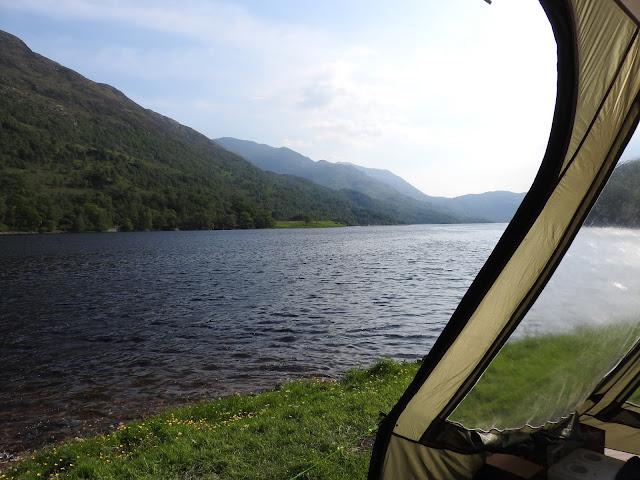 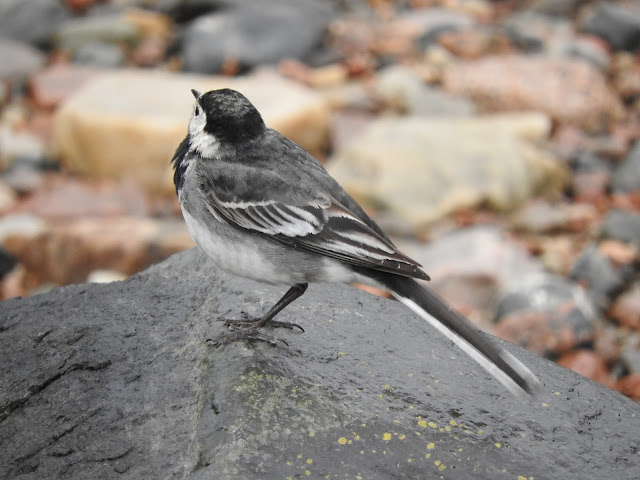 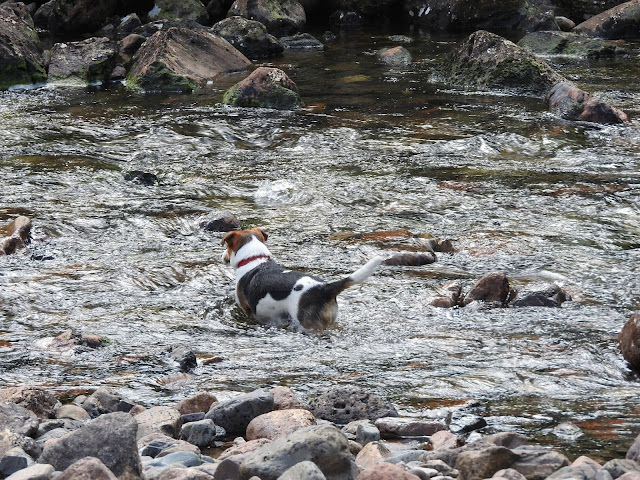 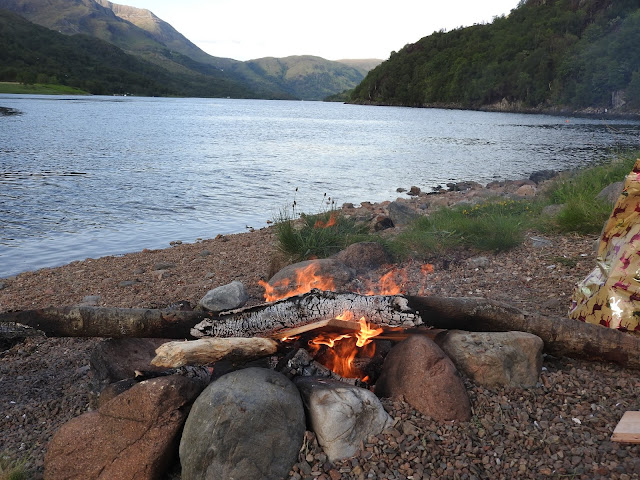 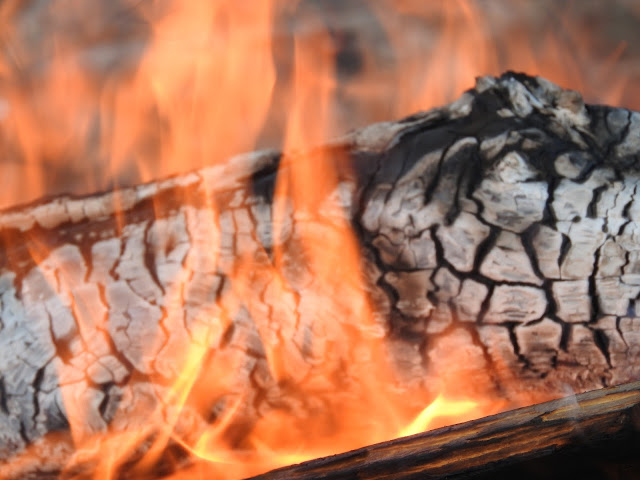 How was your weekend? If you were lucky - like I was - it was a long weekend. I took annual leave on Friday to make it longer still. We went camping with friends, an annual tradition I would hate to miss.

As the weather forecast was for sun and heat in our part of the world, we decided to set-off for our camping trip early, aiming to depart at 9:30 am. Believe me, this is quite an achievement, particularly since our camping trailer had to be completely emptied, sorted through and packed again and all this during a normal working week. All three tent dwelling families arrived at the same time, which was lucky because the campsite was filling up fast. The camper van family arrived a little later but could be accommodated, too. We were guided towards the beach, which was our hope. We like to arrange our tents in a circle of sorts so that all tents open towards a communal 'courtyard' but the space on a slope did not allow for this. We pitched in a row, facing the sea loch. No majors fights erupted between couples, which is always good. Putting up a big tent can be a tense affair. We put up the event shelter, too. The campsite was very busy but from our wee spot, this was not noticeable at all. All tents were on a slope, with the sleeping areas on a ledge. Calling it a ledge was a bit optimistic because really, it was more slope than ledge and there was considerable sliding downhill during the night....

We did what we do best when camping: sit together, chat, laugh and eat lots of food. The children were rarely seen. It is quite wild in and around the campsite and there are hills and brooks to explore, and of course there is the loch shore. The children all love the freedom and usually go feral. I was going to show you a photo of James and Alistair's feet to give you an idea of the relative neglect but I don't want to spoil your appetites or trigger a call to the local children's services. There was only one injury: James cracked his head, but all was well after cuddles and cleaning of the tiny wound. He sauntered off to do some more climbing almost before the antiseptic was dry.

Some of the campers went hillwalking on Saturday. I stayed behind with two friends, assuming the role of the responsible adult on site. The children all declined the offer of a breathtaking view on the Devil's Staircase walk (part of the West Highland Way). We all went for a short gentle walk on Sunday, which was lovely. The Glencoe area was very busy with walkers and less energetic admirers of the stunning surroundings.

The weather was a typical mixed bag. It was unusually hot and sunny on Friday, cooler with spots of rain on Saturday, cloudy but dry on Sunday and cooler with a little rain on Monday. We did manage to pack away the tents dry, which is always a bonus.

With the warm weather came the midges. Consider yourselves lucky if you have never experienced the Scottish midge, a mighty adversary that reduces even the strongest man and woman to a sobbing heap of itching flesh. Have a look at this video to get an idea of the extent of the midge problem. It was not quite so bad last weekend and for this I am grateful. Insect repellents may stop them from biting but does not stop them from swarming around you, which is extremely annoying. Smidge and Avon Skin so Soft are hailed as midge repellents that work but in my experience, they don't. Reach for the DEET instead, even if you don't like to expose yourself to it under normal circumstances. Antihistamines are useful, too.

Campfires are a must when we go camping. We brought wood to burn but also collected driftwood. I bought extendable marshmallow forks and magic fire dust, both of which were a great success with the children. The forks should come with a warning, the points are very sharp indeed but they extend to to about two arms lenghts', which keeps the little ones away from the flames. I don't see the attraction of a hot and sticky marshmallow (or any marshmallow) myself but I am content to help others find their inner oozy happiness. The kids also filled ice-cream cones with chocolate and other delights, wrapped these in tin foil and cooked them on the fire. They were in junk food heaven. Sitting around the fire was not as pleasant as usual due to the midges but it wasn't really cold and the fire was more of a tradition than a  necessity.

I have to admit that James and Alistair didn't eat much of what I would consider real food, even though it was on offer. Food is always the same on our camping trips: BBQ on Friday, curries on Saturday and fish supper on Sunday. Each family cooks a curry. I made a black pepper beef curry this time. This year's fish supper was not good, I suspect it was fried in oil that wasn't hot enough. Breakfasts are usually traditionally cooked ones. My favourites are potato scone and egg in a roll. For lunch we usually have a pot or two of soup. There was cake and more cake and even some fruit for those that were still hungry. Being outside all the time does definitely increase the appetite. Despite this abundance of food, I ate lightly because my tummy was and is still bothering me.

Washing the dishes is quite an undertaking when there is that much food... it is not exactly minuted anywhere but there is an unspoken rule that everyone has to do the breakfast dishes at least once.

It was a most wonderful weekend and many new memories have been formed. After many years of camping we have found the ideal core composition of families, give or take one. We know each other well. No doubt we'll be still camping when the kids have long left, reminiscing and talking about the olden golden times and helping each other apply antihistamine cream on the ankles when mobility fails. That's for the midge bites btw, not some strange way to pass the time.

If you are keen to camp in the Highlands, you should try Caolasnacon. I have still not figured out how to pronounce it but the website says it is Gaelic for 'narrows of the dog' . The facilities are basic but clean and the location is great. The owners always say that they won't turn anyone away but the really good spots on the shore of the loch are few and it pays dividend to show early.

Thanks for stopping by and saying hello. Wishing you a lovely week. x
Posted by Christina at 20:38