the year in books so far - May update

Thanks for your Birthday wishes. You are all so kind! It is good to be celebrated in style. The meal out was a success and the birthday BBQ with friends was great, too. It's a long wait to the next birthday now, such a shame. 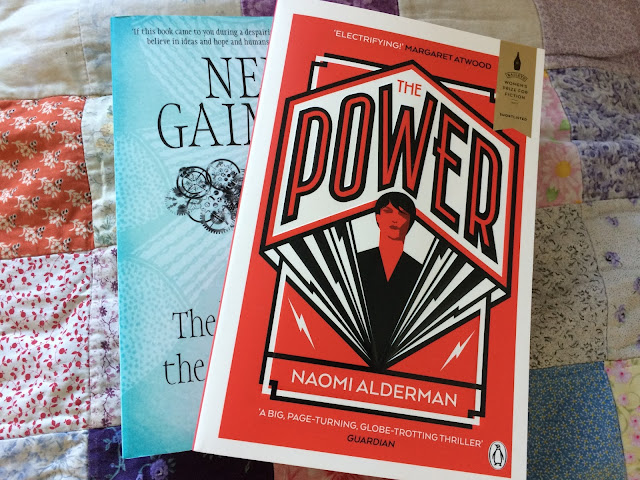 How is your reading going? My own reading is slow, partly because I seem to have less time, partly because I can't find anything that I really really want to read. I go through phases like that when I just don't feel inspired. I last posted about my reading in February!

I have read two more Neil Gaiman books, both of which I loved. 'Stardust' was a beautiful tale of love and perseverance. It is a good for the soul, nothing beats a good story with a heartwarming ending. The story is set somewhere and sometime in England. Tristram Thorn sets out on an adventure to find a fallen star that is sure to win him a beautiful young woman's heart. His travels take him over the wall behind his village into and all across Fairie, where nothing is how he ever imagined it would be, least of all the fallen star.

'The Graveyard Book' is written for children but is also worthwhile to read for grown-ups. A toddler accidentally/luckily escapes the murder of his entire family by toddling off into the night (as they do). He ends up in the local graveyard, where he is adopted by a long dead couple. They name him Bod, short for Nobody. I was never quite clear why Bod's family was murdered and why the killer is still looking for Bod, which makes it impossible for him to leave the graveyard. Fear not, plenty of adventures are to be had amongst the ghosts and Bod's schooling includes all sorts of interesting things and is quaintly outdated for he is taught by long dead people (the graveyard has not been used in modern times).

I read another children's book, Beetle Boy by MG Leonard. It is really entertaining if you like children stories. At the beginning of the book, we meet Darkus Cuttle, a boy whose father has mysteriously disappeared from the Natural History Museum in London. The story is a tale of supernatant beetles, creepy neighbours with a beetle infestation, a monstrous beetle collector, friendship and of course a rescue mission. I really enjoyed this quick read. I suggest you stay clear of the book if you happen to be a molecular biologist, fact checking science is not the author's forte.

I did read some adult fiction, too. I enjoyed 'Four letters of Love'by Niall Williams. It is beautifully written tale of love. Here is the blurb:


Nicholas is 12, living with his parents, when his father gives up his job and throws the household into disarray. Across the country, Isabel is sent to convent school but runs away. Isabel and Nicholas are made for each other, but how will they know?

You'll just have to find out yourselves! It is strange really, I didn't particularly like any of the characters, except maybe Isabel, but I greatly enjoyed the story. Niall Williams has a beautiful way with words, that's for sure.

I have not quite finished Nutshell by Ian McEwan. I don't like it much. I can't identify with any of the characters and most definitely not with the talking (but rather witty) foetus. The blurb sells it as 'told from a perspective unlike any other, Nutshell is a classic tale of murder and deceit from one of the world's master storytellers.' Trudi, the mother of the talking foetus is an unpleasant character, engaged in an affair with her husbands brother Claude, who must be one of the dullest people ever described in literary history. She drinks far too much, both are greedy and ruthless. The foetus' description of their lovemaking makes me shudder still. Trudi lives in the marital home, a priceless if rather run down property somewhere in London, which she and Claude are desperate to own. Do you need to know more? I'll post you my copy if you like.

I  listened to the two latest instalments of James Oswald's crime fiction series featuring inspector McLean, 'The damage done' and 'Written in bones'. The McLean books are always quite entertaining although the picture the author draws of Police Scotland is far from comforting. Lets just hope that the real Police Scotland is not governed by irascible, unreasonable, potentially corruptible individuals deeply entwined with big business and politics. I don't care much for the hint of the supernatural but it doesn't bother me too much. After all, it is all happening in Edinburgh, a safe distance from my home in Glasgow 😉

Finally, I enjoyed a non fiction read: 'Zoobiquity - The Astonishing Connection Between Human and Animal Health' by Barbara Natterson-Horowitz and Kathryn Bowers. I am collecting popular science literature for the new Masters programme I am developing because I like to encourage students to read above and beyond the prescribed literature. I did enjoy this book, it is always good to be reminded that we are just one kind of animal and that veterinary and human medicine could learn a lot from each other.

I am planning to read the two books on the photo next - whenever this may be! The Neil Gaiman book is called 'Smoke and Mirrors', a collection of non-fiction essays that I have been wanting to read for a long time. The book with the rather too shouty cover is 'Power' by Naomi Alderman. Its central premise is women developing the ability to release electrical jolts from their fingers, thus leading them rather than men to become the dominant gender. Dystopian science fiction - a favourite of mine. I am also looking to download a couple of easy-to-listen-to audiobooks as my Audible credits are stacking up. Any suggestions are welcome.

Wishing you a good day. I hope you find some time to read your favourite book, or maybe listen to a great storyteller. x