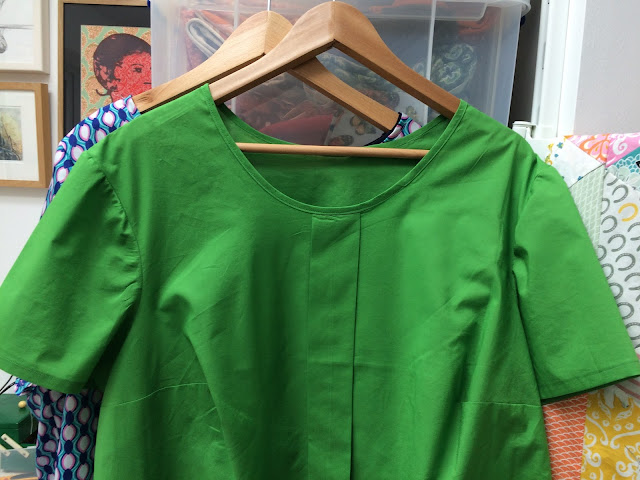 I have been procrastinating over another Sorbetto top. You may remember that my first iteration was a multi-toile-pulling-my-hair-out affair. Although I like the top and I think it looks good on me, I know that there are mistakes not visible to the untrained eye. I couldn't let it rest.

For my second Sorbetto I went right back to the beginning, starting with the sleeved version pattern. I knew which size to choose and what changes to make before cutting the fabric so felt more confident. What I didn't take into consideration was that for my first top, I made a short inverted pleat rather than a full length box pleat... this added to the final width of the top. The new top was too tight around my hips. Not by much but enough to be annoying. Also, the darts were just a little too long, ending at my apex. It does of course make sense, the pleat takes away two inches of width from the centre of the top. I don't know why I am unable to think things through before I storm ahead! Luckily I had chosen to use the cheapest fabric in my stash, a black so translucent it would need decent underwear to be worn in public. It cost about £7 for the entire length of fabric so I wasn't too devastated to declare this a toile.

I moved the darts and added a little width, went back to my stash and found another piece of cheap fabric. I bought it as cotton lawn but to be honest, it has nothing of the lovely drape I would expect from cotton lawn. It has the feel of a too thin sheet and feels quite stiff, even after washing. I do have some really nice fabrics in stash but didn't want to use them for fear I would produce yet another unwearable Sorbetto. Sewing the top was a breeze, as you would expect after so many toiles! As expected, it was easy to set in the sleeves. There is a slight gather but not more than I can live with.

Alas, the new bright green Sorbetto fits really well. I may not get much wear out of it because it crinkles like hell and not in that charming way linen does. You can see my feeble attempts at ironing above. Still, it will be good to wear around the house or in the garden.

I didn't take a photo modelling the top, it would have been too much effort to scrub up to look partly presentable.

Now that I know for sure the pattern works for me, I can dig out my nice fabric! If only I had a little more time. Work gets in the way sometimes. Ah well.

I am currently working on a toile for a summer dress. It is the Upton Dress by Cashmerette. I am making version B with V-neck and V-back and a gored skirt. If you click on the link, it is the purple dress Jenny is wearing. I need to adjust me thinking a little for this dress because I have not sewn anything fitted lately. But more on that another time!

Thanks for stopping by and saying hello. x
Posted by Christina at 12:55