a sigh of relief 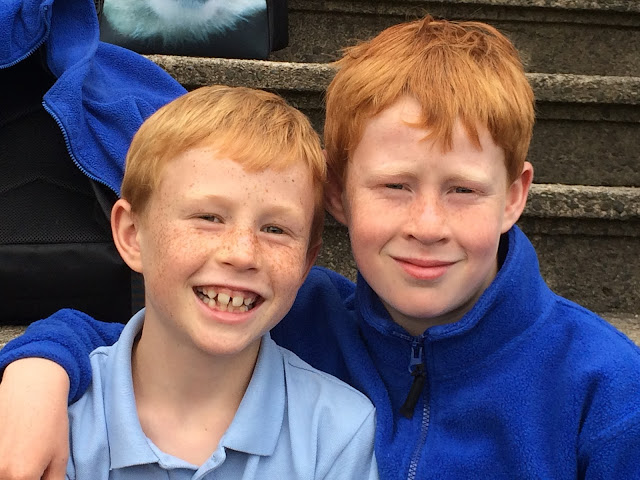 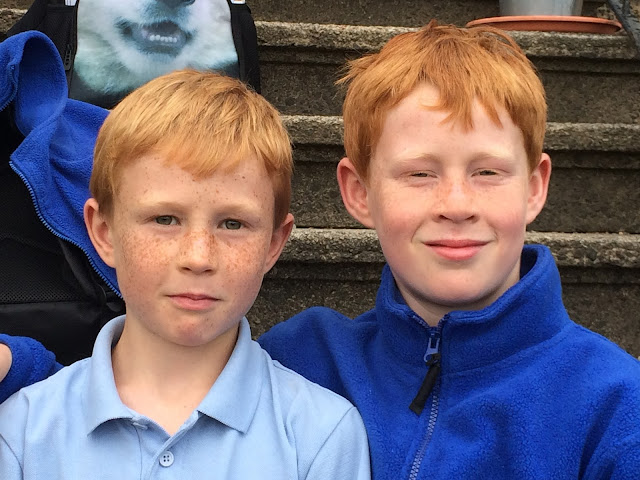 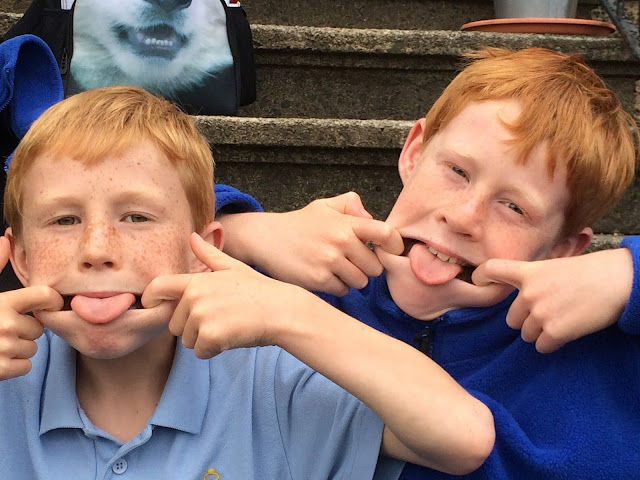 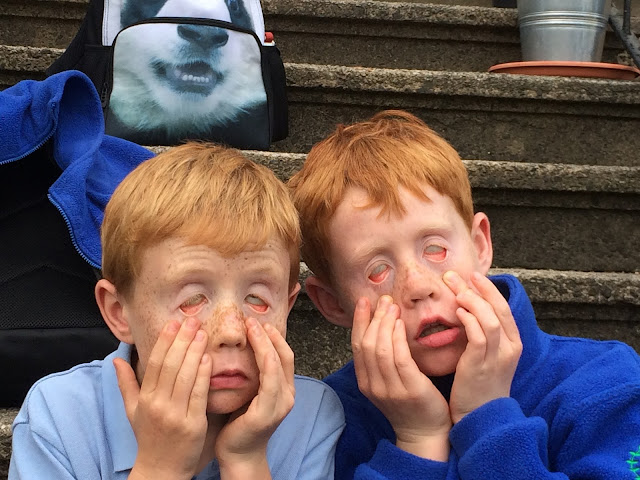 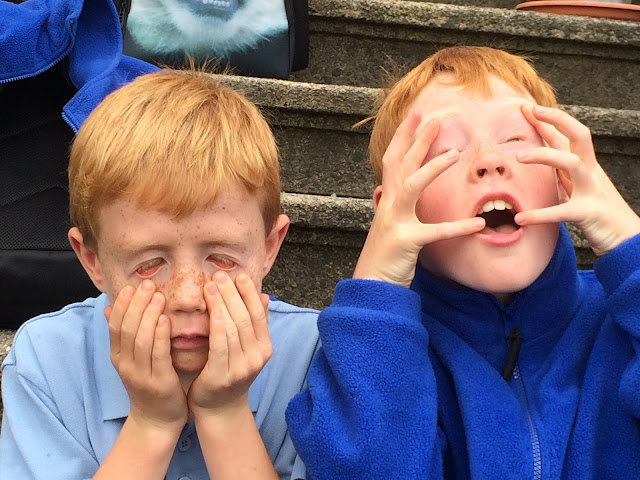 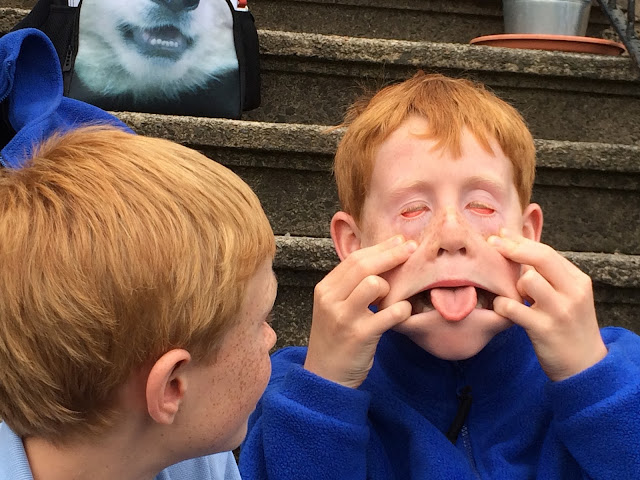 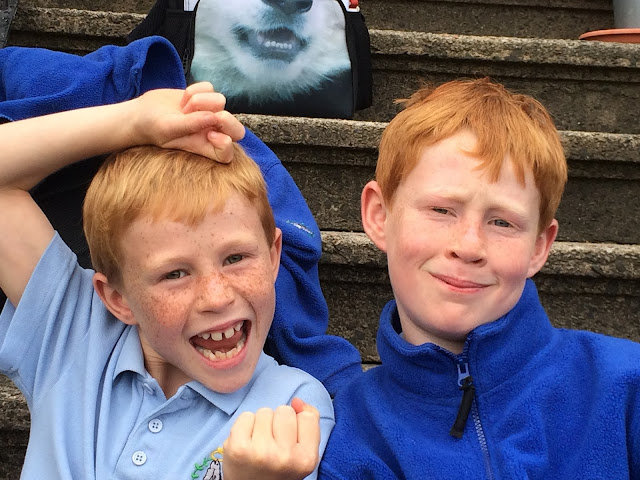 Yesterday marked the end of the summer holiday. As the children scampered off to school (some more reluctantly so than others), mums and dads skipped away from the drop-off zone with a happy bounce in their step, humming songs of freedom and of good things to come. Me and Jack took our time to walk home, him checking out all the nooks and crannies he hasn't visited in weeks, me contemplating the prospect of a day of work without interruptions. Oh the joys of the first day back!

I managed to take a photo of all four, they are sitting on our front steps as far from each other as possible. There is not a single photo in which they are all looking like themselves. We'll laugh about these photos in a few years time, I am sure we will. The photos here are of James and Alistair after school. They were in good form. Clubs are back, too. The two monkeys got back from cub scouts smelling of fire and adventure. It is good to have a routine once more.

Summer school holidays are far too long. I wish we had more frequent but shorter breaks. Wouldn't it be great to have a decent holiday in late spring, when the weather in Scotland is (more or less) reliably good? Summers are a mixed bag. One day it feels like November, the next like a cheap copy of a summer's day in Italy. There are some truly lovely days but not many.

We took a family holiday at the very beginning of the holidays, at the end of June. It is far cheaper then and far less busy because the English schools don't break up until the end of July. All four children spent a week with my mum in Switzerland, but not at the same time. They all enjoyed their time with granny and were thoroughly indulged. It is nice for them to be treated like royalty now and then.

Sam was working as an intern for four weeks to gain real work experience and to help him decide what university courses to apply for. I am pleased that his Scottish Higher results will allow him to apply for the courses he is most interested in and at institutions that have a great reputation. He'll definitely apply for courses at Scottish universities, which is a relief because Scottish students at Scottish universities don't pay tuition fees. Yes, we are lucky.

Although Richard and I are both employed in the higher education sector, our contracts are year round, not term time. Childcare can be an issue. This year was easy. For the first time, we didn't pay professionals to look after the children. Instead, we worked out a routine that kept the time the children were on their own to a minimum and paid Annie to entertain James and Alistair. She offered to do one week on a trial basis and then continued for a further two weeks, doing a marvellous job. She did take the odd day off, which was fine because we can work at home in principle and keep an eye on things. Of course not all was perfect, but it never is. I did enquire about a holiday camp for the young ones after a particularly rocky day but Annie got so cross with me that I abandoned all efforts and let her do what she wanted.

I wonder what the new school year will bring. Sam is sitting sixth year, taking only subjects he enjoys. His schedule is probably the least challenging of all four despite having to sit more Scottish Higher and Advanced Higher exams at the end. He is doing four subjects and can enjoy these as he has sufficiently good grades for University entry already. Annie is now in S3 and has selected eight subjects that she will study for the next two years. Her choices are very different from Sam's at the same age. I think her favourite subjects are home economics and geography. Sam's were computing and graphic design. Annie will do well, she takes learning very seriously. James is in P6. He also takes learning very seriously but finds it far more challenging. I think we'll see big changes in him this year. He has already shown signs of greater independence, for example yesterday, he called his cub scout leaders to find if cubs was on, then he called his friend's mums to let them know. I had to remind myself to stop staring at this little creature of mine, so full of unexpected confidence and optimism. Confidence is so important for success. Alistair is now in P5, which is unbelievable. He shows no interest in academic studies but has so far been doing well. I doubt he'll change much this year but there is hope. He did say he wanted to participate in the K-Factor (which is the schools equivalent to the X-Factor), I guess that is something to aim for. He suggested a piano recital but failed to recognise that we don't have a piano and that he has never taken any piano lessons. His second choice is preforming a Blondie song. We'll see. He does enjoy dancing and music so maybe this is where he will excel.

It was a busy day, but a good one. Here's to another good school year! Thanks for stopping by. Cxx


P.S. As I was typing this, the telly was on and and I listened to Mr Trump making a hash of being the leader of the United States. He is remarkable, isn't he? Not remarkable in a good way unfortunately, but remarkably awful. The world political situation hasn't been so volatile in a long time and it is a bit scary. I can only hope that commons sense will prevail, here and there and everywhere. Watching the news is bad for my well being.
Posted by Christina at 22:40