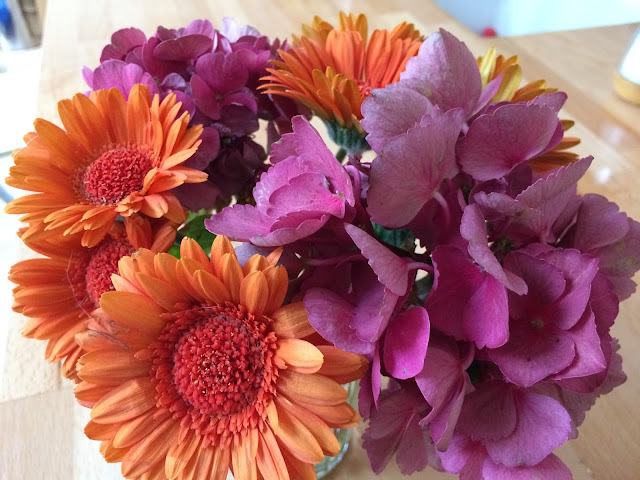 Oh my friends, it has been one busy week. Yes, I am always busy but this week it really felt busy. You see, the new academic term is approaching and the demands of work have increased dramatically. There is so much still to do and I am not sure when to do it. I am also not sure when I last brushed my hair. I will brush it on Monday, I have to give a webinar and don't want to frighten any potential fee paying students. The house has been neglected because I was too tired to care. There is was (see below) a light crunch under my feet when walking through the house. Seriously, it is was dirty, quite possibly not microbiologically safe.

Anyway, I thought I'd squeeze in a little blog post with random news of the week.

I started off the week with a nice dinner out (work, unusual). I missed yoga on that night. Even I can't be in two places at once (although it sometimes feels like it).  I had cullen skink for starter and shallot tarte tatin for main. It is a shame that the chef sprinkled lots of chopped coriander on the cullen skink. Why anyone would want to spoil a classic Scottish dish is beyond my grasp.

I had my performance and development review at work. I have been in post for six months only so was spared being rated but my line manager and I set objectives for next year. I really like her, she is so supportive and also realistic.

I emailed our human resources department to find out why I had so few days of annual leave left. It turns out that I have not 6 days of leave left but 14. Yes, 14. HR had forgotten to credit me with leave not taken when I moved from one contract to the next. I could have had more holidays over the summer! I won't be able to take much time off until December because it is term time.

I managed to squeeze in two training runs. My plantar fasciitis is finally under control and I started jogging again. I have signed up for a 5 k race on Halloween. I am fit enough to start with week 4 of my Zombies, Run training app but I want to go slow and gentle to avoid a flare up and started with week 1

James and Alistair have been a complete pain in the butt. They argue and fight so much that I can see no other solution than to keep them apart. The cub scout leader complained, too. I decided that from now on, they have to take turns going to scouts. Maybe they'll get the message. I remain hopeful. The older teenager has also been a pain in the butt. It is like he poops mess wherever he goes. You know, like a snail track, painted in litter rather than slime. At least he got his act together and went for an open day at University. I signed him and my mum up for another one next week. I have yet to tell my mum. I am sure they'll have fun. Annie on the other hand has been a delight. We only argued first thing in the morning and only because she changed her routine and clashed with me in the kitchen.

I have not done anything crafty at all. I have a finished single sock waiting for a twin, a quilt top with no backing and lots of discounted jersey that beckons to be transformed into tops. I hope I can squeeze some knitting in next week. At least it has been payday so I can buy some batting for the quilt. I cannot tell you how exiting this is.

I have not read a single line for fun.

I haven't read a single blog post all week, just the 'headlines' and I have withdrawal symptoms.

Jack rolled in something unmentionable this morning, with his dog pal Rudie. Both were covered in poo. I had to drag the beast into the shower. He wasn't keen, preferring eau de poo over dog shampoo fragrance. I barely dared to breathe, he stank so much. Jack was shampooed twice but managed to shake a fine spray of soapy poo water all over me. I considered drowning him but I am glad I didn't because I love him so much. The shower cubicle was sprayed with bleach and then scrubbed. My mother called just as I was going to get myself sanitised. I think I may have had a small tantrum. I smell like a bottle of bleach.

The shopping is done.

I had a chat with Richard, who is in Colombia for work. He mentioned another trip to Brazil later this year. My next conference is in Glasgow. Lucky, eh?

My mother is arriving tomorrow to spend a week with us. Wish her luck, she will need it, it is riotous in this household. Mind you, we'll be out of the house for work and school so maybe not too bad. I hope she has plenty of books in her suitcase. Her imminent arrival was a good incentive to clean the house this afternoon. I rounded up the troops to help. I can tell you in confidence that they were not happy and there was a lot of shouting. To be fair, it was mostly me doing the shouting, but the house is acceptable now, which is good, and most of the laundry is done.

On that note, I am off to put sheets on the beds, send the boys to bed and then I'll pour myself a gigantic gin & tonic. Sleep well! xx

P.S. My heart just broke. ,James' best friends rang the bell on the way back from the playground.  That late? Not to ask James to play but to have an urgent pee (in my freshly cleaned bathroom). James was in bed playing his Nintendo and I hoped he'd not notice. But he did.

Second P.S. I removed the 'follow by email' feature from this blog. There was sudden increase in followers (by and order of magnitude, from 39 to over 600). Most email addresses had a whiff of spam. I am sure there were quite a few genuine followers and I sorry if you are affected by this. Can I suggest you follow using bloglovin, or the blogger feed? Thank you.