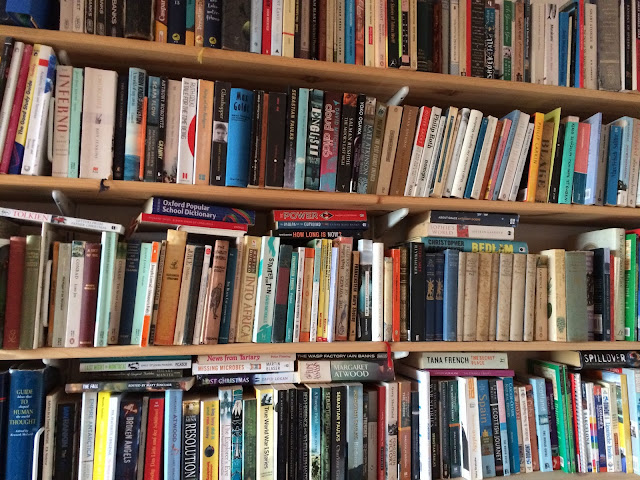 I noticed that my blog is currently focusing on things that I make, particularly sewing. This doesn't reflect my life very accurately, I spend far less time sewing than I spend time folding laundry and doing homework and whatever chores come your way when you have lots of children, nearly as many pets and a big house that acts as a magnet for dirt in the area.

I have missed writing about my reading adventures and have decided to resurrect my monthly book posts. I enjoyed reading more when I shared the experience with you. 2017 was definitely not my most exiting reading year! So, which books were on my virtual reading pile in January? The pile is virtual because I mostly listen to audiobooks, my favourite way of enjoying fiction. Non fiction I prefer in book form. I know, strange.

In no particular order, here my January reading:

"Today will be different" by Maria Semple. I chose this book because I really enjoyed "Where'd you go, Bernadette" by the same author. This newer book I found quite disappointing. As in the previous book, the heroine struggles with life. Eleanor enjoys a rather privileged life, not one I can imagine for myself. You know, the lady that lunches kind of life. Not all is as it appears though and just as Eleanor decides to turn a page and is ready acknowledge her old self, everything begins to unravel, starting with her little boy pretending to be sick at school. One thing leads to another but it is rather unmemorable to be honest and although there are some family secrets, it is all a bit dull, too.

"Calling Major Tom" by David Barnett. This book on the other hand I enjoyed immensely. At the beginning of the book, we meet Thomas, a cantankerous forty something year old accidental astronaut on his way to Mars. When the onboard digital communicating system fails he finds out that his spacecraft is equipped with a backup satellite telephone. I can't quite remember why but Thomas decides to call his former wife but he accidentally reaches Gladys, a seventy-something year old lady who is experiencing the early stages of dementia. She is the guardian of two grandchildren, Ellie (15) and James (10) whilst their dad is serving a prison sentence (their mum has been killed in a car accident). Ellie is trying hard to keep it all together but their already desperate situation spirals out of control when they are faced with eviction from their house because Gladys was scammed into giving all their savings to a desperate Nigerian prince (funny enough, I received an email from his "cousin" just last week. I deleted it). You'll have to find out for yourself what happens next. I can assure you this book will warm your heart. I really rather liked Gladys despite her short comings.

"Damocles" by S.G. Regling. This is an humankind meets alien story with a twist. Set on Didet, a world very different from ours but also not that different, it is based on the premise that an ancient people has populated the galaxy and humans of one kind or another have evolved on many different worlds. In in the distant future, the humans of earth have set out to find their cousins. That's only marginally important though, the story focuses on communication, and how to establish a rapport with one another when language barriers and and societal differences are almost too big to overcome and how seemingly tiny misunderstandings have near fatal consequences. It is also the story of two individuals. Meg, a language expert from earth and Loul, a young man from Didet. It is not a love story, not in the romantic way anyway. The name of the book, Damocles, is well chosen. I enjoyed the story and although we don't currently try to establish a rapport with aliens, the book has plenty of relevance to our lives.

"Places in the darkness" by Christopher Brookmyre. I love Brookmyre, he is witty and very very Scottish. This story is set hundreds of miles above Earth, on the space station Ciudad de Cielo. This is a gateway to the stars it appears, a first step to colonising the solar system and beyond. You may be forgiven for thinking it is another science fiction novel. As a matter of fact, it is a murder mystery in a slightly unusual place, maybe with a twist of science gone to far. On Ciudad de Cielo, there is a lot of bootlegging, illegal alcohol and prostitution but the authorities are turning a blind eye. In fact, a senior figure of the security services is Nikki "Fix" Freeman, a corrupt former police woman is pulling strings in the underbelly of the station. She is not to pleased about the recent arrival of Alice Blake, a government  figure who is in charge of an investigation into the corruption on the space station. Shortly after her arrival, the first ever murder on Ciudad de Cielo is discovered, followed shortly thereafter by another. It took my a while to get into this book for two reasons. I really found Nikki Fix's character unpleasant and I didn't enjoy the narration. The accent was a generic American English with some attempts to emulate accents from people originating all over the world. The latter was done very poorly. I am a bit funny with accents in audio narrations, I like the voice to be in the author's own accent because I like it when the vocabulary matches auditory experience. Some very Scottish phrases just don't sound right unless the accent is Scottish. Yes, I know, I am weird.

"A gift of time" by Jerry Merritt. I don't know how this book ended up on my pile (technically a list of files on my phone) but I did enjoy it. It is firmly in the science fiction genre. In the first chapter, we meet Micaya Fenton, an 80 year old man tired of life, planning his suicide. Upon returning from somewhere I cannot remember now, he finds a crater in his front garden, complete with a strange time glider machine and a naked virtual woman. The creature appears to exist in the circuitry of the time glider but can project as a person. It (she?) is a scientist of sorts, just a bit on the strange side and exploring through space and time. Micaya helps her repair the broken time glider. As payment for his help, the virtual creature returns Micaya to his 10 year old self with all the knowledge of his 80 years, plus a very handy understanding of complex mathematics. With the life experience of an 80 year old man, Micaya sets out to correct the most serious mistake of his life (I am not telling you). But living life knowing the future isn't easy. Every action alters the future he remembers until much of what he remembers never happened at all. Those changes work of course against him and Micaya grows up and ages once more. It is an interesting concept, that of time travel and I quite enjoyed the thought experiment. I enjoyed reading about a childhood in the 1950s and 1960s in a small town in a Southern region of the US. I also enjoyed the narration, which was like a song. The narrator did very well portraying the generational nuances in language, which I found was very pleasing to my ear.

"Mrs Dalloway" by Virgina Woolf. I was looking forward to reading this book for book group but I didn't enjoy it at all. The book chronicles a single day in the life of Mrs Dalloway, a privileged English woman in the early 1920s. I found her an immensely unpleasant woman. We encounter Mrs Dalloway first on her way to the florist and we leave her at the end of her party. I thought the portrayal of English society at this time was rather interesting and I guess I enjoyed to have a wee wander around London, noticing tiny details. I didn't enjoy viewing the world from within the heads of various people, it was awfully confusing and the narration jumps in and out and to and from  people's minds, sometimes in one single sentence. It was really difficult keeping track of whose thoughts I was following. I felt like being a bit stoned without actually being stoned.  Not an experience I am planning to repeat anytime soon!

Other books I really enjoyed recently are:

If you are are offended by strong language, teenage sex and drugs, you should probably stay clear of the Panopticum. It is pure heartbreaking. I think I am going to write more about these books in another post. It will be the Scottish edition as all books are local.

I have a few books lined up to read. One is the first autobiography by Barack Obama, from a time before he was a politician. There is a small story behind me choosing this book, I'll tell you after I finished reading it. The title is "Dreams from My Father: A Story of Race and Inheritance". I read the introduction to the 2004 edition (which I think was the second edition) and I am glad to notice that Mr Obama is a far more gifted writer than Michael J Fox, whose autobiography I read last. I think it was called "Lucky Man". I am quite interested in how people learn to live with life changing illness (in this case Parkinson's disease) but it was a pile of sh*te. Please do not waste your time with it unless you are a big fan of Michael J Fox and don't mind his super-inflated ego.

What have you been reading lately? I'd love to know. Have a fab weekend, hopefully with time to read a book.