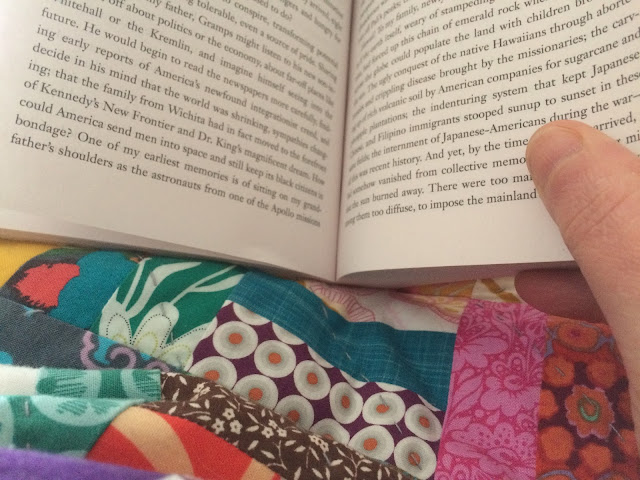 I wanted to share a few books that I really enjoyed lately, all set in Scotland, written by Scottish authors. I do love it when books are set in places that I know. I have that strange idea that one day maybe I'll bump into one of the characters in a book that I really loved. You know, when queuing for a tuna crunch at Greggs for example. I know, bonkers but there you go. These are the books I would like to share with you today:

Many of you will be familiar with "Mrs Oliphant is completely fine" so I'll start with this. It is set in Glasgow and the Glasgow portrayed in the book is a Glasgow I recognise. I am not going to give you a blurb, it is such a well known book now and a quick Google search will tell you all you need to know. I was very quickly fascinated by Eleanor's character, a youngish woman full of surprises, softness and kindness buried under a pile of learned and carefully executed mannerisms. If there ever was a book character with serious attachment issues, it is Eleanor. It is frightening how prolonged childhood trauma affects a person's life. Her life, her mannerisms and her relationships are an ugly monument to a difficult childhood and a not quite finished growing up phase. So much of her Eleanor's ways of life seem learned from books - the wrong kind of books set in a different time with the more obscure unlikeable characters as a model. It is also heartwarming to read how Eleanor gradually finds her way in this complicated world of of ours, with the help of Raymond. I must say, Raymond with his non judgmental big heart is a typical Glaswegian. I know a few blokes just like him, one in particular comes to mind. Laura, with her Next Home coordinated house and fancy hair salon is also a familiar character. I liked her. Finally, Sammy, the old man that holds them all together. They don't come much more Glaswegian than him. I am not attempting to give you a review here, just some thoughts.

"The Panopticon" by Jenni Fagan has at its core a deeply troubled character, Anais. It is not a heartwarming book but one that will leave you gasp for breath, feeling relieved the book is finished but at the same time wishing to find out what really happened Anais, Tash and all the other teens. The first time we meet Anais, she is handcuffed in a police car, school uniform soiled with blood, on her way to the Panopticon, an institution for the particularly troubled and troubling teens. I loved Anais Hendricks, I really did, a soft core in a very hard shell, damaged beyond repair and full of contradictions and good intentions. What I really wanted to do is pick her up and wrap her up in my big bosoms and give her warmth and love, which she so desperately needed. Not just her, all the children at the Panopticon. Gradually, we delve deeper into Anais life story, narrated by herself, sometimes lucid and full of clarity, sometimes acid tripping and disturbing.  I'll have to direct you to the Guardian review for this book, I am finding it difficult to give you a concise summary. One sentence in this review stayed with me: "What Fagan depicts in her debut novel, The Panopticon, is a society in which people don't just fall through the net – there is no net". I am worried that this view is true for some of the most vulnerable people in our society, children in care among them. The narrator of the books is quite amazing, she achieves a believable characterisation of Anais, although sometimes I think Anais is more poetic and informed that is strictly speaking likely. Jenni Fagan is fluent in the Scots of this part of Scotland. If you are unfamiliar with the vernacular, you may find it difficult at points, particularly that narrated version. The language is not for the faint hearted, nor is the content. There is sex, swearing, paranoia, acid trips, violence but there is also poetic love, beauty and wonder.

Because I enjoyed Jenni Fagan's prose and her talent to bring to my attention pockets of our society that are so easily ignored I picked her second novel soon after finishing the Panopticon. It is called "The sunlight pilgrims". The story is set on a caravan park in Northern Scotland in the very near future, a few years after the Gulf Stream collapses. You may or may not know that the Gulf Stream is one of the strongest ocean currents in the world, it brings warmth the UK and north west Europe and is the reason why it is relatively mild here. To give you an idea of our latitude, we are 5 degrees further north than Winnipeg in Canada and 2 degrees further south than Juneau in Alaska. If it wasn't for the Gulf Stream, our winters would be considerably colder. I know, hard to believe. The Gulf Stram like all the other ocean currents are affected by global warming and the scenario in to book is not complete fiction. Anyway, the story is not about climate change but more about how communities cope with changing circumstances (extreme cold in this example). It is also a book about being different and how difficult life can be for a teenager that does not easily fits within the parameters of societal norm. We meet Dylan, grieving for his mother and grandmother, recently moved from London to a caravan he has inherited. For him, this is story of discovery. We also meet Stella, a strong young transgender teenage girl struggling with the thought of male puberty and how this is affecting her life. There is a poorly informed GP (no doubt doubt constrained by a failing NHS), bully school children and Stella's father, who rejects Stella the girl. We also meet Constance, Stella's mother. Constance is a kind of survivalist hero but not the kind you might encounter in a survivalist novel set in the U.S. There are no weapons, no withdrawal from society and clandestine undertakings, just a woman set to survive in a new frozen over Scotland. There are more marginal characters that add to the "outcast" crew of the caravan park, and there is a bit of a love story, too. As you can imagine, it is a complicated love story. Anyway, I have given away too much. For a more descriptive blurb, there is always Goodreads.


My final Scottish book of this post is "House of spines" by Michael J Malone. This is a ghost story set in Bearsden, an affluent suburb of Glasgow. Ran McGhiee is the main protagonist in this story. We meet him at his lowest, or so we think. He is a lonely, frustrated writer, troubled by mental illness. Unbelievable as it may seem, Ran is the sole heir of Newton Hall, a vast mansion in the countryside near Bearsden. As it transpires, his long dead mother was from money. The mansion belonged to Fitzpatrick, Ran's great uncle, who has been watching Ran grow up from a distance. The heart of Newton Hall is the library with a collection so astonishingly large it would take several life times to read all the books. It is a perfect place for Ran. Alas, not all is as it seems, as the weeks pass and Ran continues to explore the mansion, he begins to loose his grip on reality. This is not helped by Ran stopping his medication but is largely due to the intoxicating effect of the house. It is a well crafted ghost story, chilling and scary but not so much that I couldn't continue. I did take a break or two though to relax my clenched yaws. The narration is superb, should you choose audio over print.

If you like crime fiction, you might enjoy Caro Ramsay's series of novels, all set in and around Glasgow. The narration of all is great. If you love the Scottish accent like I do, you'll enjoy it very much. Caro and I did the Diploma in Forensic Medicine and Science course together, many moons ago when my academic career took an accidental detour into forensic biology. Some of the characters in her books are modelled on people I know and I can tell you in confidence, that they are rendered very accurately indeed. We didn't get to know each other well enough for me to be turned into a character and for that I am grateful.

This should keep you busy! Let me know if you enjoyed any of the books, and if you hated one or the other, too.

Thanks for stopping by. Have an amazing weekend. xx
Posted by Christina at 09:14