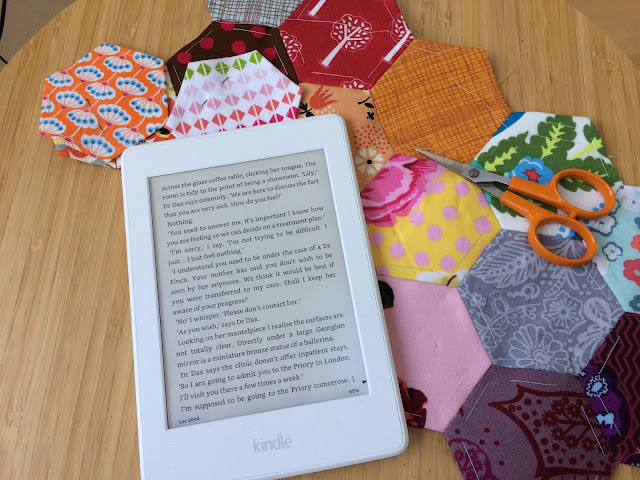 I have been reading quite a lot lately - having crossed over to the dark side and now reading from a Kindle with unlimited books at my fingertips. It was a bit of a rocky start, my first Kindle froze within three days, to not ever wake up again. When I was trying to find a "contact us" type of link to report my problem and maybe, just maybe find a solution, I noticed that there is a service just for Kindle users, where you can log your problem and ask for someone to call back. I settled in for a long wait, a couple of arguments and lots of eye rolling and suggestions to try this and that when I had already exhausted all the troubleshooting of frozen Kindles there is. Imagine my surprise when within minutes Chris, a real person with immaculate manners called me up, checked a few details and hey pronto, arranged for a new Kindle to be shipped that very moment. I returned my broken one free of charge, to join its fellow dead Kindle brothers and sisters in the Kindle recycling facility. Lets hope this is not a figment of my imagination.

Anyway, I have been actually reading, not just listening. It is the first time in 4 years that I have two audiobook credits left this time of the month.

Here is what I have been reading:

This Is Going to Hurt: Secret Diaries of a Junior Doctor by Adam Kay. This candid account of the daily ups and downs as a junior doctor in the NHS is quite an eye opener. It is funny, sad and thought provoking at the same time and it comes as no surprise that after years of training, Adam Kay gives up his medical career. I am amazed and humbled that so many doctors stay on actually. I read it at the time when Hospital was airing on BBC2. This series followed a typical NHS hospital through the typical NHS winter crisis. It is hair rising to say the least and I know it is not a unique case as I have friends working in the NHS. Having said that, the situation overall seems a little less precarious in Scotland, which is a relief.

Brainstorm: Detective Stories from the World of Neurology by Suzanne O'Sullivan. If you liked Oliver Sack's the man who mistook his wife for a hat, you'll probably enjoy this. Suzanne O'Sullivan is a neurologist specialising in epilepsy and in this book describes the many faces of this conditions, some of which we are maybe familiar with, others not so much. I didn't understand quite how many faces epilepsy has. It is an intriguing read and one that makes me grateful that I am not a patient with epilepsy.

The Woman in Cabin 10 by Ruth Ware. A quick read that doesn't leave a lasting impression. It is the story of a travel journalist participating in the maiden voyage of a bijou luxury cruise. I can't remember her name now but it doesn't matter, she is utterly forgettable. At the time we meet her, she is a traumatised woman, having barely recovered from a very recent home invasion. She is also a heavy drinker. During the first night on the yacht, she believes to have witnessed a woman going overboard - not by choice. She was very drunk at the time, barely conscious indeed. The yacht security chief does not believe her, nor does anybody else but she keeps on digging and of course one disaster follows another. It is the kind of book where you can read every fifth line and not miss anything. The characters are one dimensional don't elicit a feeling of sympathy, not even the victim(s). The finale is predictable. It left me with the urge to rewrite this story but of course I have better things to do.

I don't know if it is just me but I find so many "bestsellers" below par. I sometimes think the authors must assume their average reader has the intelligence and attention span of a tapeworm. Maybe it is the publisher that dumb things down?

Sourdough by Robin Sloan. I am not sure how this ended up in my reading pile but it was a fun and quick read. The main protagonist Lois, a gifted, highly paid and overworked programmer in robotics, finds herself unexpectedly the guardian of a sourdough starter. Not just any kind of starter but one with near magical properties and one that makes the most amazing bread. Lois embarks on a journey of bread baking, and in the course of setting up business as a baker, she ends up solving a major problem in robotics. There is of course a crazy scientist trying to solve the mystery of the sourdough starter (its composition). There is also a mysterious people that are dispersed across the globe, all excellent bread makers and story tellers. As you would expect, all spirals out of control before a degree of normalcy returns. This book is just as easy a read as the previous one but there is more depth to the characters and a more surprising plot. For this I was grateful.

The unseen world by Liz Moore. I really enjoyed this book. The prose was enjoyable and multilayered and far more complex than the simple one-short-sentence-after-another style of the boring thriller above. The people in the book have depth and I didn't get bored or annoyed with them after two chapters. We meet Ada when she is 12 years old. She is brought up by her father David, an eccentric and gifted computer scientist interested in artificial intelligence and virtual reality. Not your standard computing geek of the 1980s, that's for sure. David is socially awkward and lives in a bubble of work and work. He home schools Ada in the most unusual way by taking her to work daily to his Boston based computer lab. Ada's childhood is very unusual and she has very little interaction with children her age. At at time when David's lab begins to gain acclaim, his health starts to decline rapidly because of early onset dementia. He spends his last few years in a care home and Ada is eventually taken in by one of David's colleagues. She spends her teenage years in a loving but chaotic environment. It is when the legal aspects of guardianship for Ada are examined that it is revealed that David is not who he claims to be. Ada continues to unravel the secrets bit by bit, a process that doesn't come to a conclusion until the final part of the book when Ada herself is my own age.

Echo boy by Matt Haig. I have a soft spot for Matt Haig's fantastical novels. He doesn't shy away from difficult topics, in this book privacy in a virtually connected world, the de-extinction of animals from the past, artificial intelligence etc. Audrey is a young woman living a in the not terribly distant future (late 2100s I think). The world is a very different place, climate change has made large parts of the world inhabitable and life as we know it today does no longer exists. There are super fast transport systems that allow travel to far flung places in minutes, the moon is colonised and many aspects of life are lived in virtual reality (school for example). There are also echoes, which are sophisticated androids that work for humans. Slaves essentially. Without giving anything away, not all echoes are the same, in particular Daniel, an echo that appears to be able to experience emotion, which is entirely unique. This is essentially the story of Audrey and Daniel as they seek to navigate a world I am glad I will never have to experience.

In typical Christina fashion, I am reading not one but four books at the moment.
I am such a butterfly reader. Reading is like crafting - depending on my mood, I pick what takes my fancy most at the given moment.

That's it really. What have you been reading? Anything I should absolutely add to my list?

Changing topic for just one paragraph: I have noticed an increase in Bloglovin followers these past few weeks/months. Not all are genuine, some have rather dodgy websites in their description. Actually, it is always the same, followed by some text in the Cyrillic alphabet, which I can't read and am reluctant to google. I don't want to repeat the link here but it has a three letter word starting with "s". The account holders have names like Eve83545, follow thousands of blogs but only have a handful of followers - what were they thinking?! I have contacted Bloglovin to report and remove these spammy followers but have not heard anything back. If only there was a quick way to remove them! If you know a trick that I don't, please share it with me.

Last but not least, I just witnessed a squirrel steal Jack's bone. Both bone and squirrel are gone. Interesting!