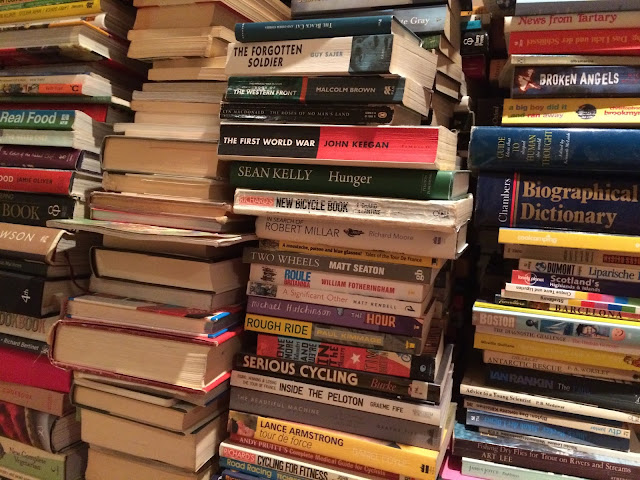 We are still in Denmark enjoying the heatwave. I am feeling bad for all the farming folks, the prolonged drought must be ruinous. I have lots of time to read and write but no means to get my holiday photos from my camera onto my iPad. I am giving you a round-up of books instead. My reading year is going well, I have enjoyed many good books over the past two months. A couple of not so great reads also found their way into my pile but I can live with that.

Let’s start with the worst one. This was ‚The Cows‘ by Dawn o‘Porter. Waste of time but maybe a glimpse into a dysfunctional, fast-paced and sometimes vitriolic social media driven world. Not the kind of social media I engage with, luckily. I disliked each of the terribly flat (and I don‘t mean flat chested) women in this book and I am glad that none of my friends are like any of them. The men don’t even warrant a mention. Stay well clear of the book if you are not comfortable reading about sex. If you like rich prose, you should look elsewhere, too. I only finished because I was stuck on a plane with no Alternative downloaded onto my Kindle.

Moving on to more enjoyable reads. ‚The Bookshop of Yesterday‘ by Amy Myerson is a quick read that won‘t leave a lasting memory but enjoyable and for me belongs into the category of a beach book. You can read it whilst still keeping an eye on the kids playing in the waves. It is the story of Miranda, a young history teacher. She is an only child growing up with loving parents in an affluent Los Angeles neighbourhood. There was also uncle Billy, whom Miranda very much loved but he disappeared from her life at the age of 12, after a major argument with her mother. Now an adult, Miranda inherits  Billy‘s bookshop, which is teetering on the brink of bankruptcy. With it comes a complicated riddle that leads Miranda towards solving the mystery of Billy‘s disappearance.

Next up is ‚Seven Days of Us‘ by Francesca Hornak. My Goodreads friend Sher describes this as ‚a peek inside the dysfunctional lives of a family.‘ This is a better summary than I could give you and for more details I shall direct you to Goodreads. I enjoyed this book, the people are interesting and there is a good depth to their characters that makes them real.

I also enjoyed ‚Calypso‘ by David Sedaris. If you are familiar with this author, you‘ll know that he is a witty writer that can make you laugh out loud. This book is loosely following a thread in time but is really a collection of essays about ageing (somewhat gracefully), mortality and family. I enjoy Sedaris‘ biting humour but it may not be everybodys cup of tea.

I am working my way up to my favourite reads ever so slowly.... maybe get yourselves a coffee!

Injustice finished listening to ‚Orphan Train‘ by Christina Baker Kline. I felt quite emotional at times. It is the story of two extraordinary women: Molly (17, about to age out of the care system) and Vivienne (92). Molly is helping Vivienne clear up her attic, not my choice but to work off her 50 hours community work sentence for stealing a book from her local library. As the two women sort through the attic boxes, we gradually learn more about their lives. Vivienne‘s story starts in poor rural Ireland, follows her family‘s emigration to New York and their incredibly poor life there. A fire kills all but 9 year old Vivienne. She is moved to Minnesota on one of the many orphan trains. I didn’t know about orphan trains, what a sad sad morsel of history. What follows is a sequence of abusive placements and eventually we see Vivienne growing up. She is profoundly damaged by her childhood experiences. Molly‘s story is traumatic in a slightly different way but moving also. The women bond and become friends. Read the book to find out more:-)

I thoroughly enjoyed ‚A Midwinter Break‘ by Bernhard MacLaverty. He is my pal Ciara‘s dad. Ciara is a poet in her own right if you like poetry, it might be something to consider. Anyway, I have met Mr MacLaverty once, at our local Sunday community club but we didn‘t talk much with crazy kids around and whatnot. I take what I can get, not many celebrities in my corner of the world. I felt quite touched by Stella and  Gerry, a no longer middle aged couple in a somewhat lonely relationship. It made me wonder what life would be like for Richard and I in 15 years time. It is a gentle book, thoughtful and thought provoking. The prose is quite beautiful, as you would expect.

A book that was heartwarming and heartbreaking at the same time was ‚She‘s Not There‘ by Tamsin Grey. I loved the two little boys Jonah and Raff who are the main protagonist in this story. It begins one Monday morning when the boys wake up to find their mother Lucy gone. Jonah is only 9 but he is the old for his age I thought. Him and Raff manage to hide the fact that they are without a parent for days, for fear of being sent to live with their dads mother (bad granny) or taken into care. You’ll have to read the book to find out what happened next! I have no doubt in my mind that my 9 year old wouldn‘t have the wits to get himself to school if both Richard and I vanished over night! From this point of view the book is maybe unrealistic but I don‘t think the story would work with an older child.

Finally, my favourite read! This was ‚Circe’ by Madeline Miller. I have a soft spot for the ancient Greeks and their fantastical beliefs and to read about the irascible Greek gods and Odysseus and the gang from the viewpoint of the nymph Circe (the one who turned Odysseus crew into pigs) was most enjoyable. I think I prefer this modern alternative and somewhat feminist take of the ancient myths to the original. It is very cleverly written and in a style that is reminiscent of translations of the myths you might be familiar with but modern enough to make it flow. The monsters in this book are more than just vile monsters and we learn of tragedies untold before. We also get to know the unsung heroes, those unworthy more than just a few words in the original myths. I rather liked Penelope (Odysseus wife) for example.  Fictional of course but oh so clever. Go on, give it a try, you won’t regret it. It is probably useful to have a grasp of Greek mythology to get most enjoyment but the story is strong on its own.

I have ‚American Pastorale‘ by Phillip Roth on my Kindle and ‚Night Waking‘ by Sarah Moss in my headphones. What are you reading just now?

P.S. Excuse the typos that may have found their way into this post. I am not used typing on a touchscreen!
Posted by Christina at 13:04