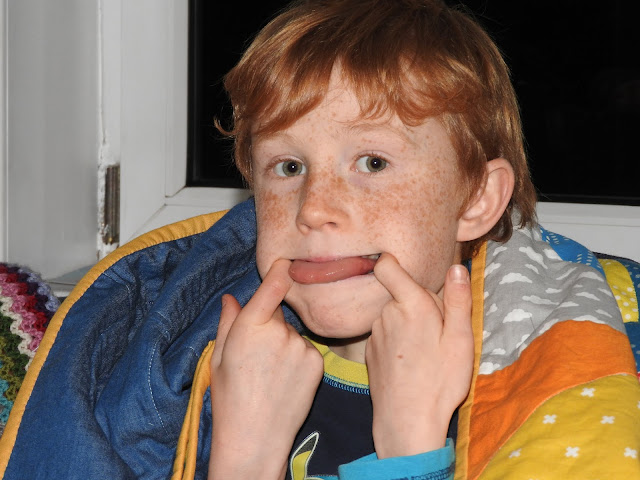 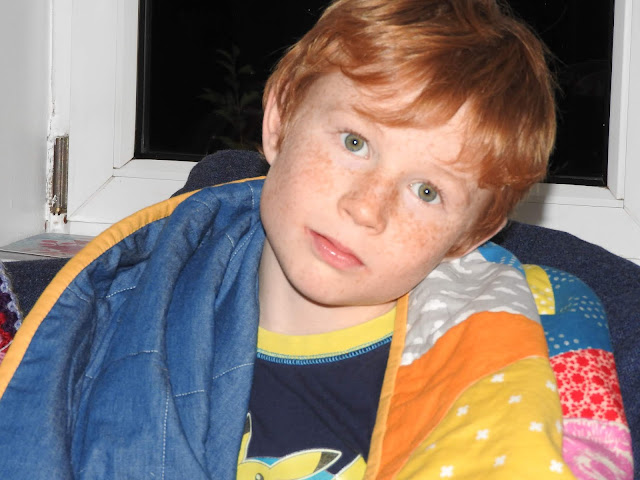 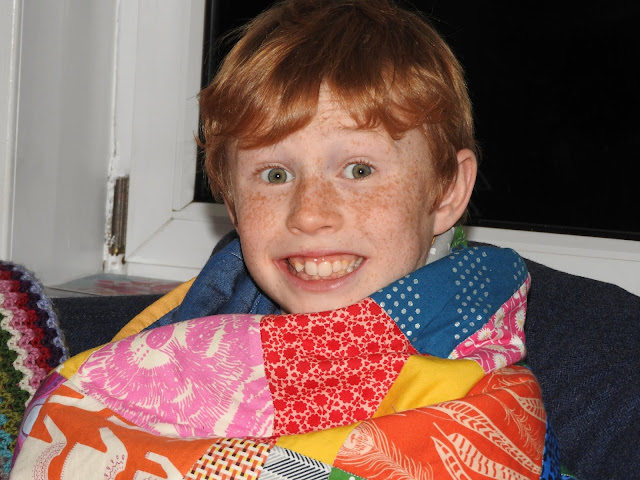 Alistair celebrated being 10. He is such a sweet little boy - and sometimes not so sweet, too. His love and cuddles are just the best. He is the only of my four children who still snuggles up with me every day. I am going to miss this when he gets older and less keen to be showing his unwavering love.

As is the custom in our house, we started the birthday morning in our bed with presents and a cake that I made myself. Not being a confident baker, I am really pleased with the outcome and so was everyone else. It was a devil's food cake complete with meringuey frosting. I am not usually fond of chocolate cakes but this one was good - light and not sickly sweet.

Alistair's birthday wish list was interesting, he has for the first time ever asked for a construction toy, specifically a box of Knex. If you have been visiting here for a while, you'll know that playing with toys is not my two youngest boys strength. Most toys are weaponised or destroyed and lost.  The joy on his face when unwrapping the Knex was a delight. He just built a bridge with wheels, very practical. He also received another stack of origami paper, which no doubt will soon be turned into dozens of Origami ninja stars and claws, mixed in with the odd swan. Alistair keeps his ninja stars and claws in a large bag and carries them to school and back daily. He has also been playing with a playmobil knight on horseback, awesome he says. We have not yet played with the new card game Trash Panda by Gamewright but I am sure we will shortly. Alistair loves our collection of card games. Gamewright Games are just the best, I have yet to buy one that we don't like. Tonight he'll be going to sleep in his new Pokemon bedding, no doubt holding tight onto his Pikachu soft toy.

Alistair is very cute, even now, aged ten. His pre adoption profile written by his foster parents mentioned this cuteness, which at the time struck me as not quite appropriate but it is really an accurate description not just of his looks but also his personality. He is tiny and wiry, with ginger hair and more freckles than one can possibly count. He always looks a little cheeky and smiles easily and often. If you are familiar with German children's cartoon, you'll know immediately what I mean when I say he reminds me of Pumuckl. I am afraid the link is German. There is a lightness about Alistair that often surprises me.

Alistair is popular,  particularly by the girls. He loves Nina, Anastazia, Eadie and Mhairi and is also very fond of Lacey and Ruthie.... A ladies man, that's for sure.

He is quite terrible at focusing on a task, unless it is something he wants to do. In this case he won't let go until whatever it might be is conquered and achieved. Unfortunately, it is never school work and he regularly lies about homework or projects. We (well, Annie) helped him complete his six week project of choosing a book, reading it and making a diorama in under a week because he never mentioned it.  Don't get me wrong, he is clever and does well at school but he has little inclination of  expending any more energy on school than is absolutely necessary. So much more to focus on!

Alistair has a temper when things don't go his way. His favourite phrase is "leave me alone", which he can shout, hiss and holler with great effect. It is quite comical really but also hugely annoying. He is experimenting with swearing and I hope he'll learn to do so only when it is sort of ok, for example when hitting his funny bone.

Alistair has a special bond with James. He doesn't like being apart from his brother. Unfortunately, they bicker all the time and at the moment, they can't be left in a room together without a minor war happening. Alistair is quick to complain and very good at being injured, a bit like an Italian footballer really. He thinks we don't see through this but of course we do. When he does really injure himself, the whole of the West of Scotland knows. His drama is really impressive. Most injuries that elicit this reaction are barely visible. He is literally bleeding to death when a skin scrape is about the size of an ant's egg. He does like to cover such terrible injuries with a plaster 20 times the size required. He would also keep said plaster on until it is completely decomposed, if we let him.

Alistair does of course want to be a footballer when he grows up. He is fast on his legs and reasonably good but not that good. I have no idea what he might become but I can imagine him belting out rock songs like Jimmy Somerville. In my mind, Jimmy Somerville looks like a grown up Alistair.  For now, I hope Alistair stays cute a for a wee while longer.

With Alistair's birthday out of the way, we can now shift focus on Christmas. I am always surprised how much pressure some women (never blokes) put on themselves to make Christmas just perfect (and it never is). So far, we have a Christmas cake and fairy lights. We have no lists, no proper plan and no idea what presents to get for the older kids. Our tree is probably still in the woods but we'll get there in the end. We always do.

Have a really nice Sunday. Thanks for stopping by. Christina xx
Posted by Christina at 19:46